Despite the political conflict and the traffic headaches, for a few hours at least, the focus on the bicycles whooshing through Jerusalem streets pushed all else to the background 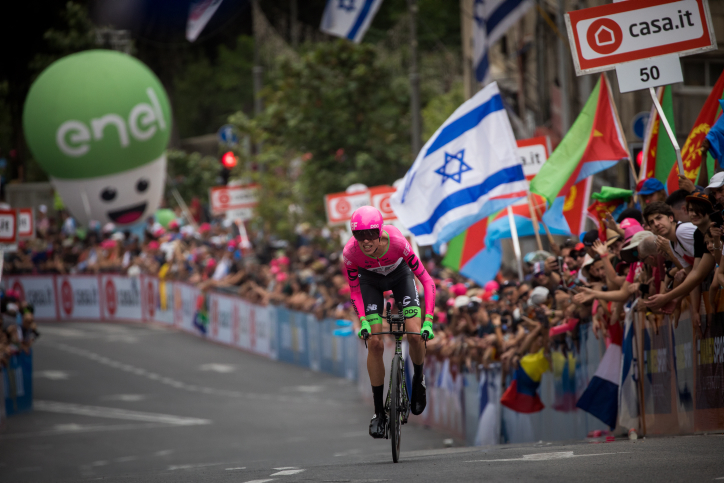 ? Can you believe this atmosphere?” Another biker whizzed up the hill to the finish line, so fast we almost missed it.

And the truth is, he was right: For a few hours on Friday afternoon, the Giro D’Italia transported us to a completely different place. Among the crowd of spectators perched along Friday’s race course, you could be forgiven for thinking you were in Europe, surrounded by cheering hoards of people complete with the cowbells that accompany major races.

The first three stages of the 21-day race are being held in Israel, after which the race will return to Italy and finish in Rome. A total of 176 cyclists from 22 teams — including an Israeli delegation for the first time — were taking part in the time trials which began just outside Jerusalem’s Old City. The 9.7-kilometer (6-mile) route took riders near some of Jerusalem’s holiest sites, though organizers were careful to avoid any politically sensitive areas.

After the Jerusalem time trials, the 167-kilometer (104-mile) second stage Saturday whizzed down the Mediterranean coast from Haifa to Tel Aviv. Stage 3 on Sunday will follow a lengthy 229-kilometer (143-mile) route — the second-longest leg of the entire race — from Beersheba in the Negev Desert down to Israel’s southern tip of Eilat along the Red Sea. 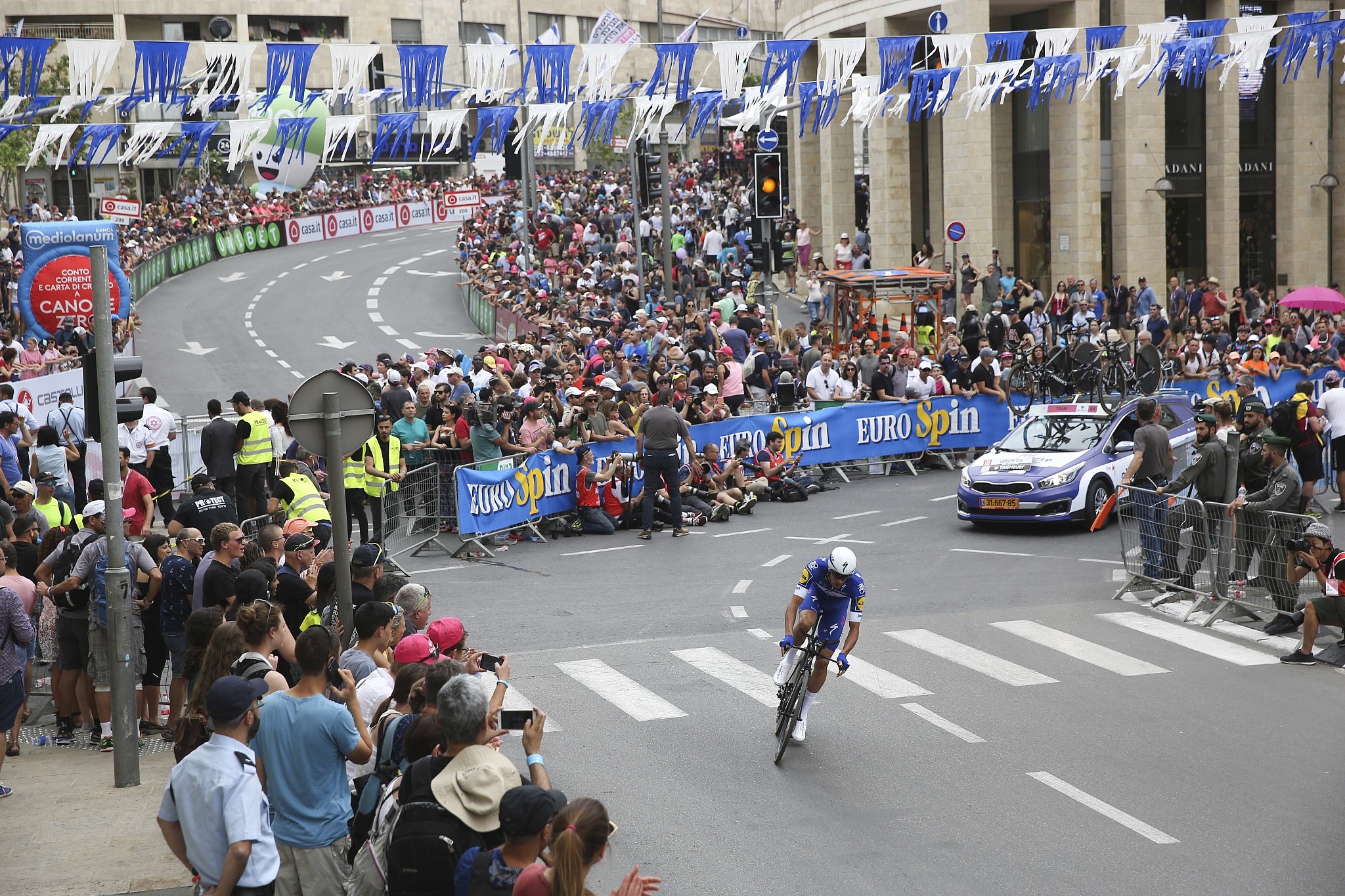 The event, the second most prestigious cycling race after the Tour de France, consists of 21 days of racing, totaling 3,546.2 kilometers (2,203.6 miles) with 44 kilometers (27 miles) of vertical elevation.

Yes, it was annoying that the roads were closed, trapping thousands of Jerusalemites in their homes for an entire day. Yes, it’s even more disruptive when the country’s major highways are closed on Saturday and the entrance to Eilat is closed on Sunday.

The phrase “sports have no politics” is tired and overused.  Of course all of those initiatives that bring people together via sports are praiseworthy and important, but the story is so repetitive it gets old.

Prime Minister Benjamin Netanyahu praised “riders from the Arab world”in a pre-race message on Friday. There are no Arab riders, though there are two teams sponsored by Arab countries: UAE Emirates Team and Bahrain-Merida. Race organizers pointed out that it’s because cycling is a new sport in the Middle East, and it takes time to build up a cycling culture that can produce champions. This is the first year that Israeli riders have taken part in the Giro D’Italia, and only because the Israel Cycling Academy snagged a wildcard spot as hosts of the first three stages of the 21-day race.

When I called the spokespeople of the United Arab Emirates- and Bahrain- sponsored teams on Friday to get a response to Netanyahu’s message, I could hear them sigh audibly over the phone as they churned out the time-worn phrases that they have polished with overuse these past few days. “We’re here to race, not to talk politics.” “Sports can build bridges where politics failed.”

But there was something about the crowds on Friday that, for me, cut through the cynicism that has built up over almost a decade of reporting in this country.

Watching the gaggle of photographers swarm over the race course reminded me of covering riots in East Jerusalem, with similar scrums of international journalists. Sometimes I’d show up to report a riot at the Qalandiya checkpoint and there would be about a dozen kids throwing stones and more than 50 reporters, cameras at the clocked and ready to broadcast those photos to the world, regardless of whether or not the “riots” were actually a news story.

This weekend, by contrast, more than 600 journalists arrived in Israel to cover the Giro D’Italia race and frankly, didn’t give a flat tire about the political situation. That can be a good or bad thing, depending on how you look at it, but it was the reality. They were there for the race, not the setting. 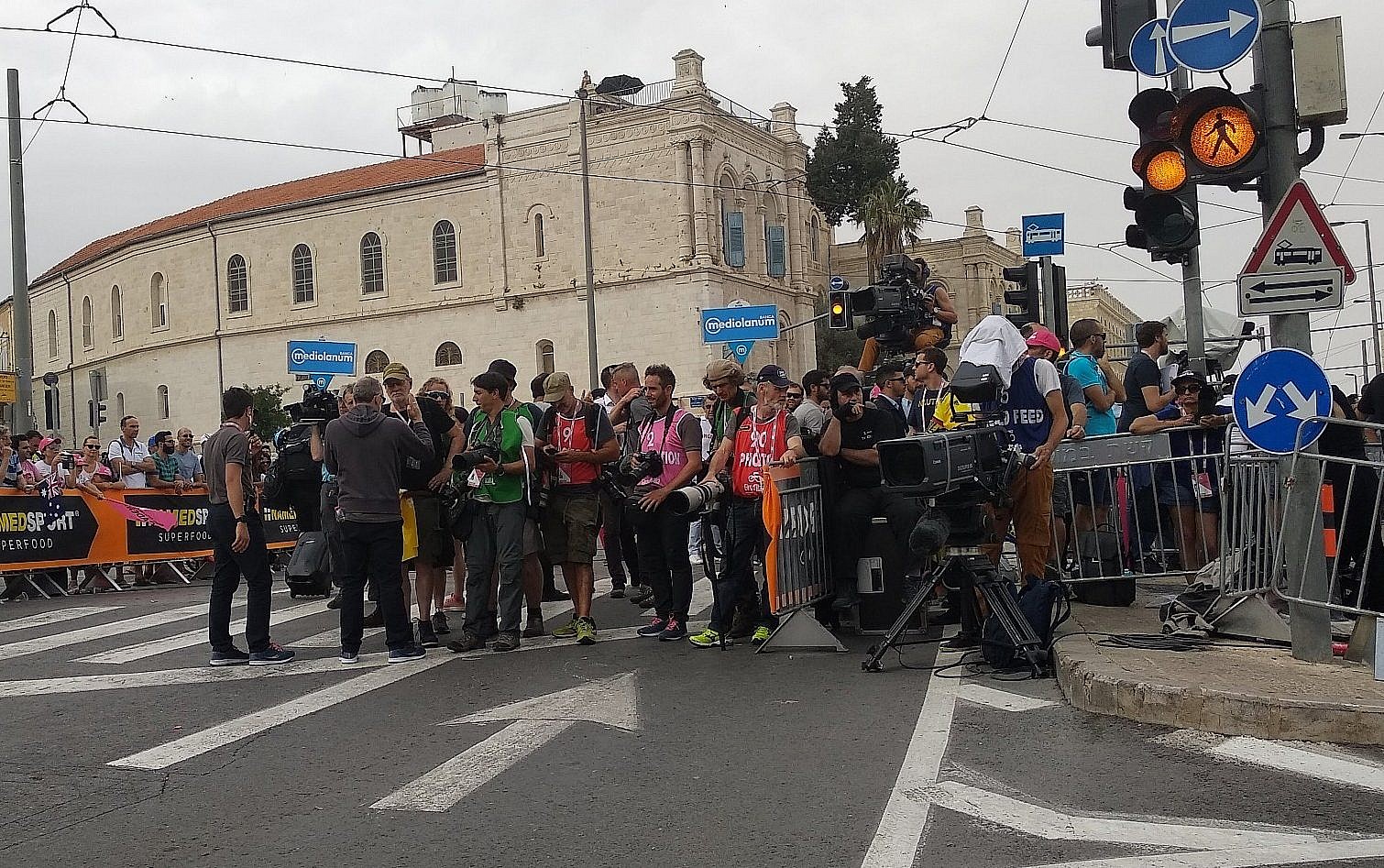 Sports journalists are a special breed of journalists: well-versed in the tiniest minutiae of their sport, with a razor-like focus on the race itself. At the media center after the first stage ended on Friday at the Waldorf Astoria hotel, spandex made way for shtreimels in an instant as the Giro D’Italia organizers and support teams rushed towards Haifa, the start of the next stage, and a 200-strong Satmar Hassidic family celebration got ready for Shabbat in the hotel.

Behind a barrier erected to protect the Satmar celebration from seeing journalists still working on the Sabbath, hundreds of sports journalists were furiously typing into their computers until one lifted his head and asked me, “Wait, what’s Shabbat?” After I explained, he was still dumbstruck. “It’s on Friday night?” he said. “I had no idea!”

And that’s just the thing: For once, the sport was the center of attention. Of course I wish we lived in an ideal world where we had peace with all our neighbors and where we could always concentrate on the sport.

We don’t, and there’s so much work that needs to be done on all sides of the conflict.

But sometimes, it’s such a relief to take a step back from the day-to-day realities of living in this country and concentrate on something frivolous, like the most expensive sporting event Israel has ever hosted. 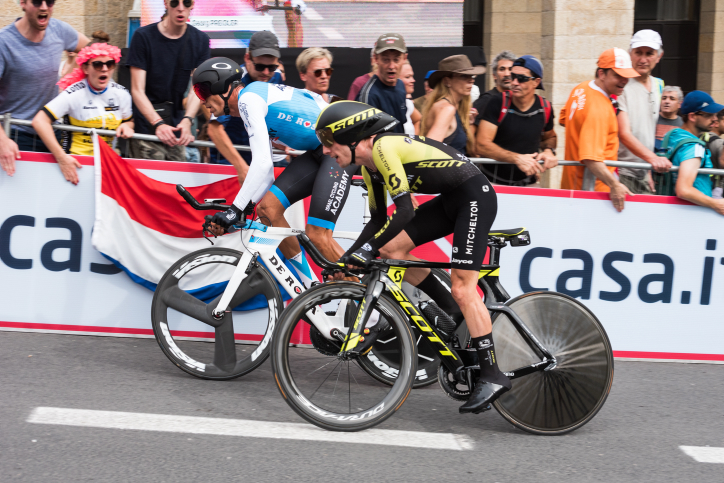 I love bicycles, although I’m not a racer. I don’t “get” these expensive, tradition-bound, super fast European races. I don’t follow the doping scandals or the latest carbon fiber developments in bike mechanics to shave 100 grams off the bike’s weight.

For me, bicycles answer a more basic need: they are my key to freedom, a self-powered vehicle that carriers me towards horizons near and far, from Jerusalem to Tel Aviv on the empty streets Yom Kippur, or over mountain ranges near and far.

Before the race, I asked Culture and Sport minister Miri Regev if the Giro D’Italia will trickle down to regular cyclists like me, people who ride on an everyday basis, pedaling cheap clunkers that don’t keep me up at night on the likely chance it will probably one day get stolen. She stammered and said, after I pressured her on specifics, that the country wants to invest NIS 16 million in bike paths. This is nice, but I know that NIS 16 million (about $4.5 million) doesn’t buy a whole lot of kilometers of bike path.

I wish I could believe the optimism of the local Giro race organizers, who hope that the Giro will encourage more Israelis to get onto the saddle. But I know the bicycle infrastructure problems in this country are deep-seated and complicated, and I don’t expect much tangible change.

Sylvan Adams, the Canadian-Israeli real estate mogul who funded most of the NIS 120 million of the Giro’s start in Israel and also paid for more than half of the new Tel Aviv indoor cycling track, hopes that these three days of racing will be the seeds that will sprout Israel’s cycling culture. Perhaps it will be so; we’ll only know for sure in a decade. Perhaps more parents will buy their children bicycles, the pedaling kind, not the electric kind. Perhaps the state will invest in cycling infrastructure so people aren’t afraid to commute by bicycle to work.

But in the meantime, on Friday, I stood among hundreds of people and didn’t think about the future of cycling in Israel or the image we broadcast of the country abroad or even the political situation.

For a few hours, I was totally mesmerized, transported into another reality where sports are paramount and shaving seconds off a clock takes years of training.

For a single afternoon, the most important thing in the world was the whooshing of the world’s best road cyclists down the streets that I call home. And it was magical.