On-bike GPS navigation is enabling a new era of adventure. 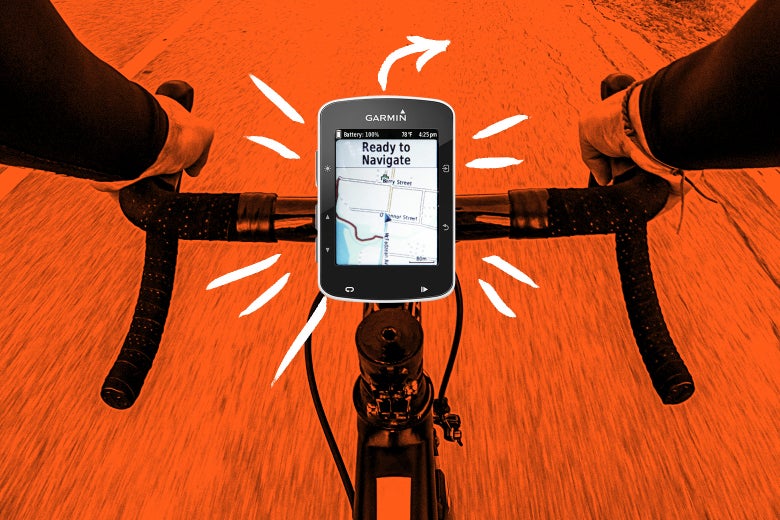 As the sun was beginning to set one evening in mid-October, a string of cyclists crested a mountain in far Northern California’s Modoc County. Lagging behind due to some flat tires, my fiancé and I were the last to hit the remote gravel road traversing the top of the ridge on this particular leg of our bike-touring adventure. While he stopped to snap a photo of the view, I pedaled on, head down, doggedly determined to reach our destination before nightfall. Five, maybe 10 minutes later, I heard yelling: “You’re going the wrong way!”

“What?!” Some arguing, capitulation, and retracing of steps ensued. And sure enough, there was a narrow dirt road I’d completely missed, with seven distinct bike tracks marking the way. We descended the rocky, unpaved road in twilight, then near darkness, then pitch-black—of course, we’d forgotten to pack lights. The terrifyingly blind descent ended up being a lesson in ride preparation and in on-bike navigation.

. It’s actually a tri watch, designed to track rides, swims, and runs with equal aptitude. It’s small for a bike computer, trustworthy, and has great battery life, but it lacks one notable feature of newer GPS-tracking devices: turn-by-turn navigation. On rides like our 2017 brevet through Northern California, that meant I was reliant on downloading the route to my phone or using a printed cue sheet, or just being observant of bike tracks on the gravel paths we were riding and staying in the company of someone else who did have a navigation-capable bike computer.

Turn-by-turn–capable bike devices started cropping up in earnest around 2015, and now navigation is included in a variety of bike computers from brands such as Lezyne, Wahoo, and Garmin. But despite the urging of friends and teammates, I was reluctant to upgrade. Cycling has always been about adventure and serendipity for me—sometimes a wrong turn can lead you somewhere beautiful. And truthfully, relying on others for partial route knowledge on long rides has been a great way to meet people and make new friends. In some way, onboard GPS navigation also felt like cheating to me, even though the need for such a feature was becoming increasingly apparent. A growing cohort of gravel, adventure, and endurance rides are all but impossible without route directions guiding the way—and I’d signed up for several such events for 2018. Turn-by-turn navigation is also useful when you’re traveling and riding in new areas, which I’d also be doing. But a new bike computer is expensive, ranging from $150 to $600 or more, and I’d watched numerous friends curse their fancier devices for shoddy battery life and inexplicable software bugs.

So despite multiple missed turns on that touring trip, routing issues on other rides, and the obvious benefits that would come with a new GPS tracker, it took me five months before finally ponying up for a navigation-ready upgrade, the Garmin Edge 520

. It was purchased out of necessity: I’d be racing the RAAM Texas Challenge, a 214-mile endurance race through the Texas hill country with countless unmarked turns. I’d have a printed cue sheet on hand, but if I wanted to win, I’d need to keep the stops to a minimum. I bought the GPS computer four days before the race. Uploading and enabling the MapMyGPS route was straightforward, and once I pushed off from the start line, the device would beep 300 feet before upcoming turns, giving me both the street name and turn direction. I could keep the course map on screen to peek at upcoming course features or rely solely on those notifications while looking at other ride stats like my power average or speed. Over the course of more than 13 hours and 214 miles, I missed only one turn—which, thanks to the device’s blaring “off course” alert, I was able to correct nearly instantly. Of the three female starters in this event, I got first. One woman didn’t finish. She missed a turn and ended up 20 miles off course before realizing it.

Since that day, I’ve used the device’s route navigation on several other rides and races and have come to accept that doing so isn’t “cheating.” It’s not like I had been riding with a paper map folded in my pocket. I still used modern GPS technology, just in a less convenient form. And to be honest, my lack of navigation hadn’t just become an inconvenience, it had become dangerous. If my fiancé hadn’t noticed my lone tire track on that mountain-ridge fire road, I could have ended up lost, alone, and hypothermic. I don’t have to use turn-by-turn navigation on every ride, but on the rides that count, such as this past weekend’s Rumble in the Ranchlands or the upcoming Dirty Kanza, I’ll be able to focus exclusively on my performance—and not have to worry about whether I should have made that left turn a half-mile back. GPS navigation is enabling a new era in efficient, self-reliant bike adventuring, but also in confidence and peace of mind when you’re pedaling through unknown roads. I should have made the upgrade ages ago.