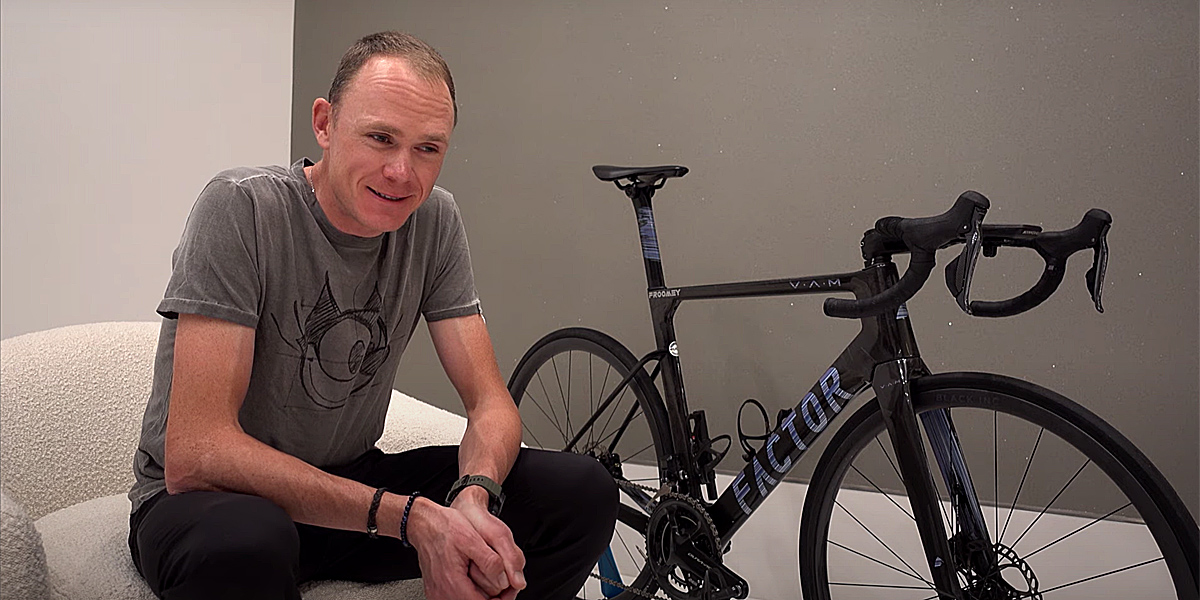 Thoughts from behind the Iron Curtain: Chris Froome is not sure about disk brakes, he never had them at Sky/Ineos Grenadiers, but with his new team and bike he has no choice. Ed Hood has been talking to our Soviet friend, Nikolai Razouvaev, who has his thoughts on the disk situation. Some of you won’t like it. 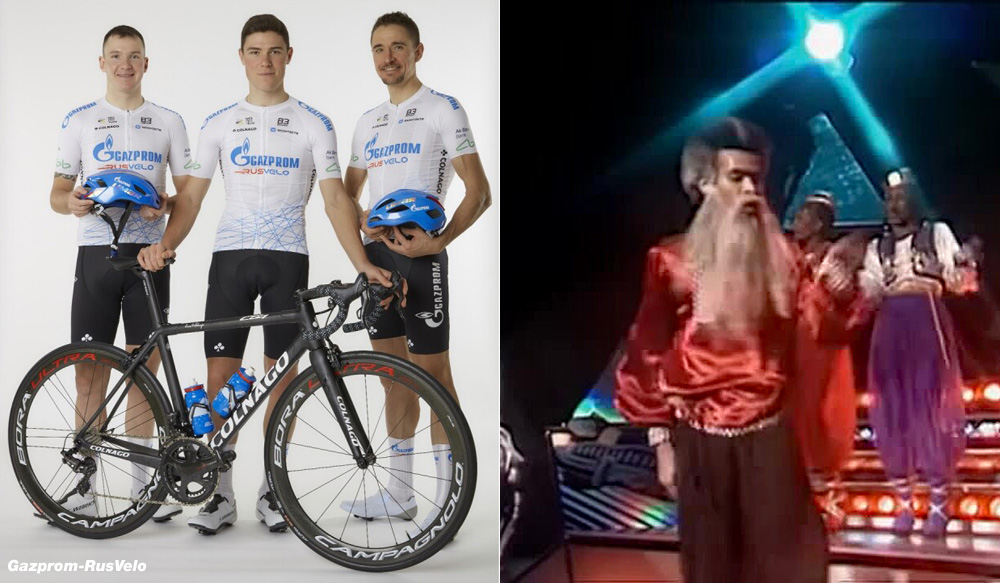 No disks for these Russians

‘Oh! Those Russians!’ So ends Euro-Caribbean popsters, Boney M’s 70’s camp classic, ‘Rasputin’. In the song they describe the, ‘Mad Monk’ as; ‘a cat that really was gone.’ Not a description you’ll see in the history books. . . Here at PEZ we have our own, ‘gone Russian cat’. Former Junior World Team Time Trial Champion as a member of the Soviet squad, Nikolai Razouvaev. What he shares with the subject of the Boney M song is that some view both men as mystics, visionaries, and prophets. The last time Nikolai appeared on PEZ was to deploy his T-34’s [legendary Russian Second World War tank] against time trial bikes, the lo-pros stood little chance against the 76.2mm of the T-34’s. 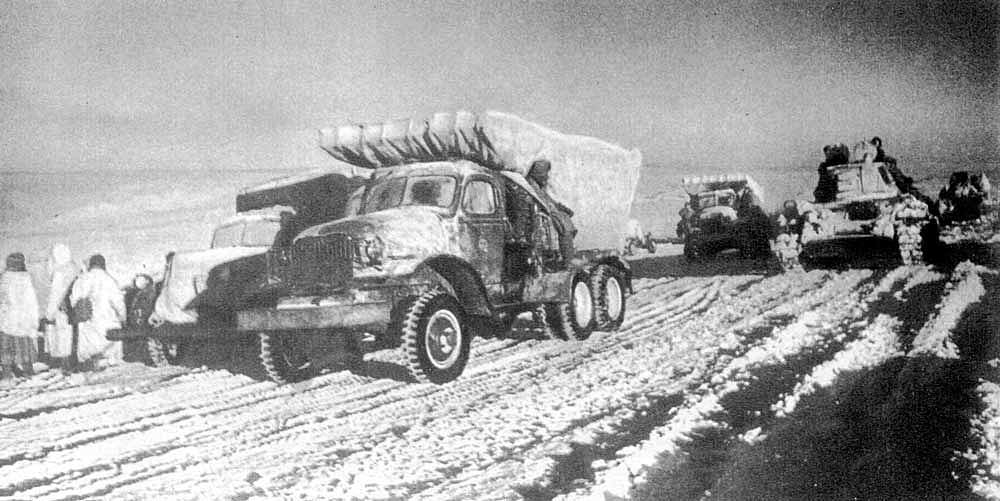 This time, the target for his Katyushas [deadly Soviet multiple rocket launcher deployed in World War Two]: Disc brakes. Find a comfortable seat, pour yourself a large Vodka – a double if you run discs on your bike – and read on. . . 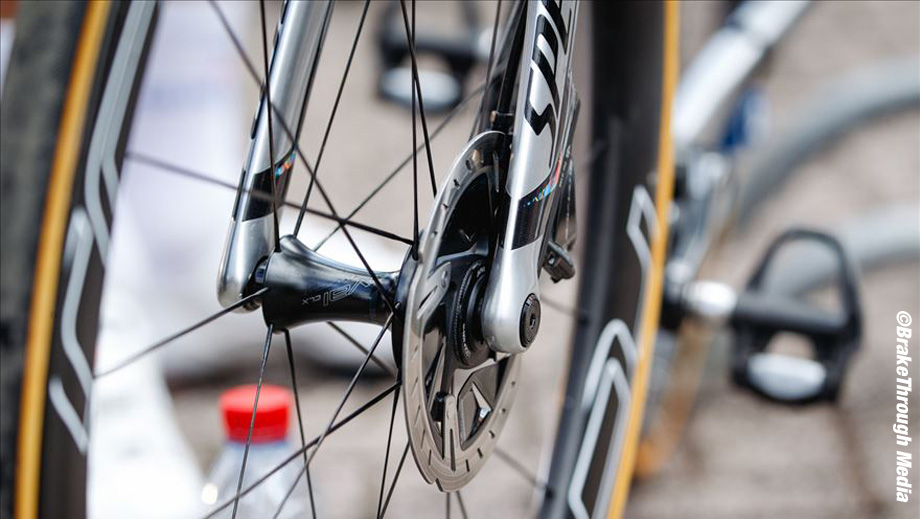 Remember the Campagnolo Delta brakes? The then latest and greatest in brake technology? Back when pros spoke their minds and had the balls to put their money where their mouth was, the peloton flipped a bird to Campagnolo and told them to shove their lousy brakes where they belong — in a bin. The Delta’s marketing spiel pitched Campagnolo’s innovation as a ‘center-pull brake with an articulated parallelogram,’ With what? Articulated parallelogram, stupid. Oh, you don’t know? Okay then. Articulated parallelogram ‘allows braking power on the brake shoes higher than the power applied to the lever’ the spiel went on to clear up. Gotcha.

We’d been braking with side-pull brakes just fine. Why the 1950s center-pull technology now? Aerodynamics, apparently. Centre-pull design, again, apparently, is more aerodynamic or so Shimano said when they brought their Dura Ace AX Aero to the market. It didn’t work. No one wants dud but aerodynamic brakes. It didn’t fly for Shimano and it didn’t fly for Campagnolo except with Campagnolo, dominating the peloton at the time, the pros got involved. Same result though — go away with your dud anchors. 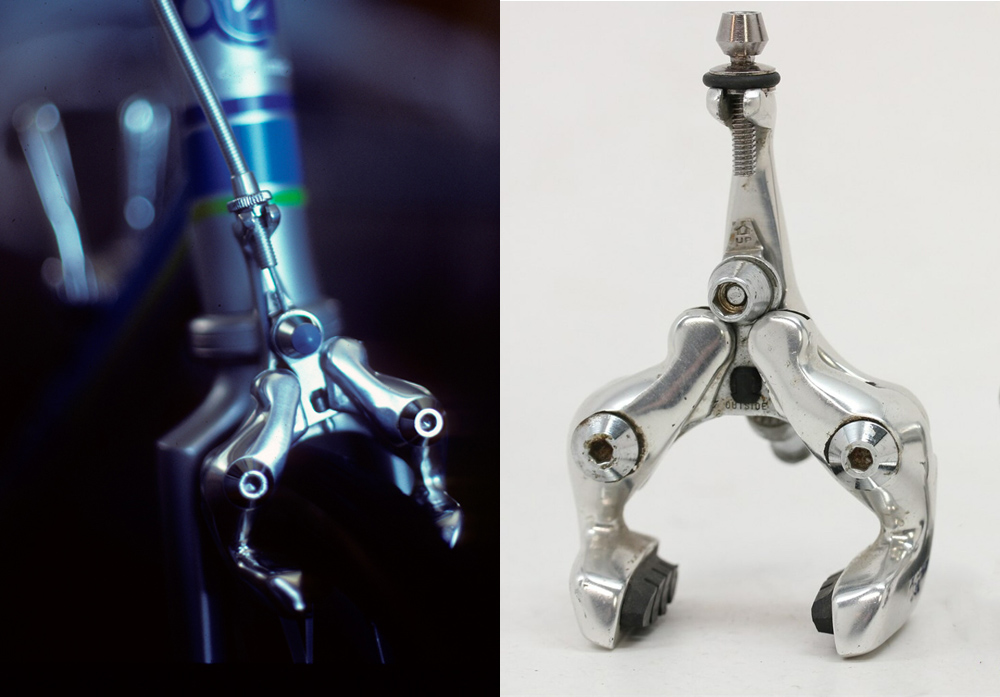 Shimano AX… no thanks

Notice the pattern and the rationale.
In the presence of adequate technology soundly suited for the purpose — in this case, stopping a bike — two major market players, in fact, the only two that counted at the time, come along and push products that neither solve a problem (how to stop a bike) nor improve on the current solution (side-pull design to stop a bike). Worse, their new centre-pull brakes don’t work as well as the existing side-pull brakes but they wanted us to buy them anyway because of articulated parallelogram and aerodynamics. 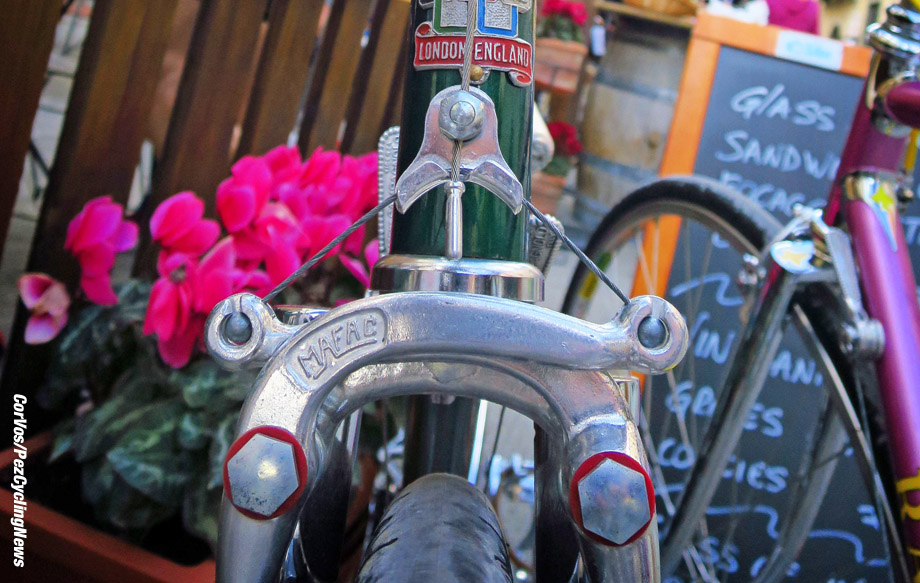 Compare this to 1952 when Mafac gave the pros the centre-pull brakes and soon everyone wanted a pair because the brakes worked better than anything the pros ever tried. Sponsors shmonsors, just give us these brakes, we want them. It’s how markets work. People coming up with solutions to solve existing problems. In planned economies, it’s the other way around. Solutions first, find problems later. No problem for a solution we just came up with? Make everyone use it anyway. Force it if you have to. 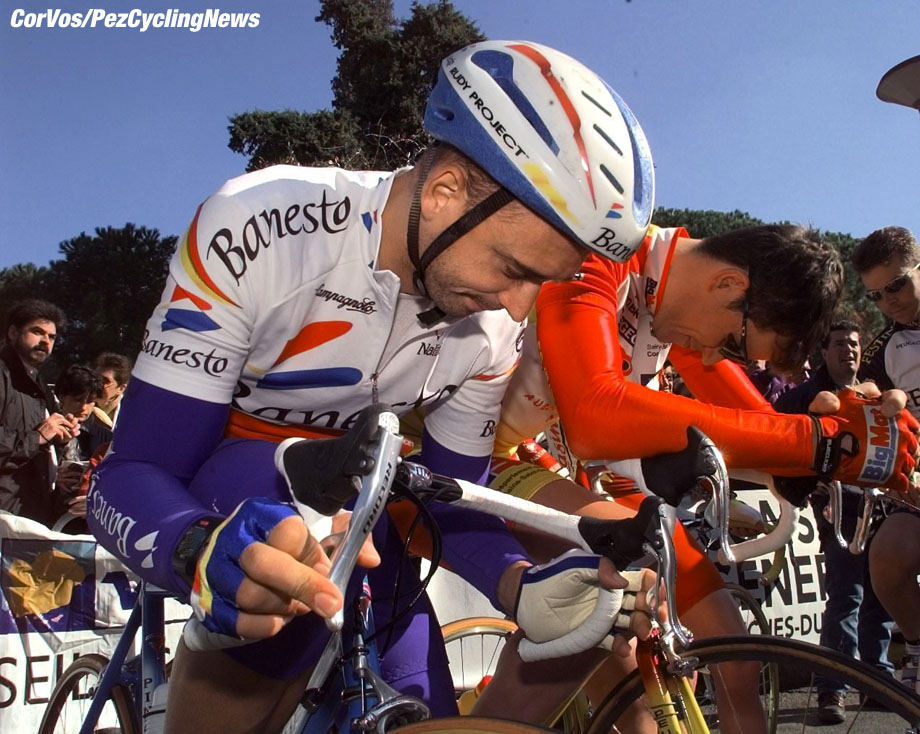 Side-pull brakes have been good enough for a long time

So, what was the problem disc brakes solved? Not the braking, surely? Rim brakes work and they work great. Compared to 25-30 years ago, modern side-pull rim brakes improved so much that when I ride my 1990s steel bike, I’ve got to remember my modern Dura Ace callipers are not with me right now. Marketing crowd and their talking heads tell us disc brakes give us more stopping power and great performance in the rain. True and true. The talking heads, they don’t tell us that no one was asking for more stopping power. No one was asking because quality rim brakes a) worked and, b) continued to improve performance with better materials and design. 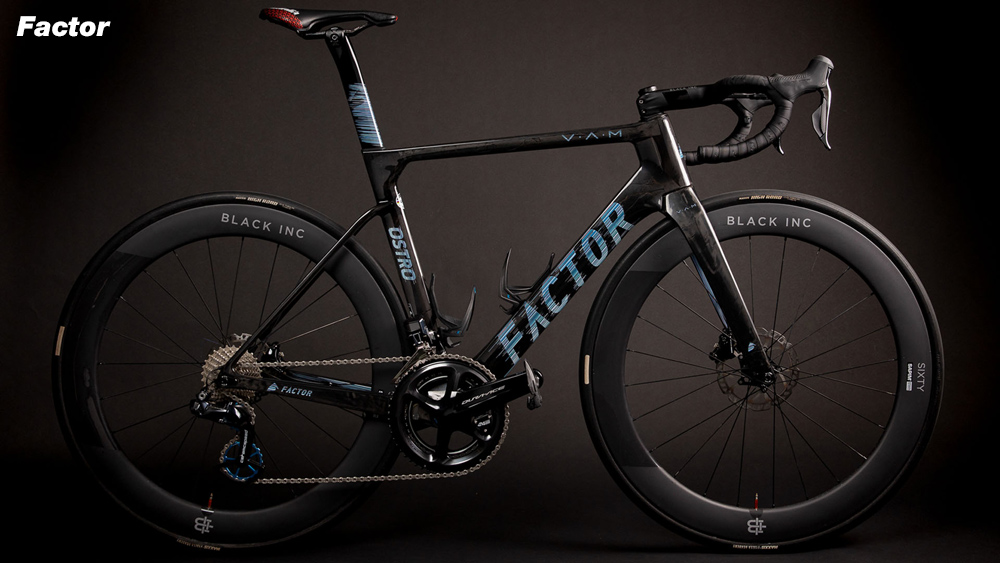 What else the talking heads don’t tell us? If we asked Froome, he would say they don’t tell you about, and I quote, “the constant rubbing, the overheating, the discs becoming a bit warped when on descents longer than five or 10 minutes of constant braking, you’re going to get one piston that fires more than another, you’re going to get these little issues…the pistons [don’t] quite retract the way they’re meant to all the time…quite often it’ll work on the stand and when the mechanic sorts it out, but once you get onto the road, it’s a different story. The brakes might work on the stand after a mechanic spends time on them. On the road, it’s a different story.” Chris Froome says that, not I. 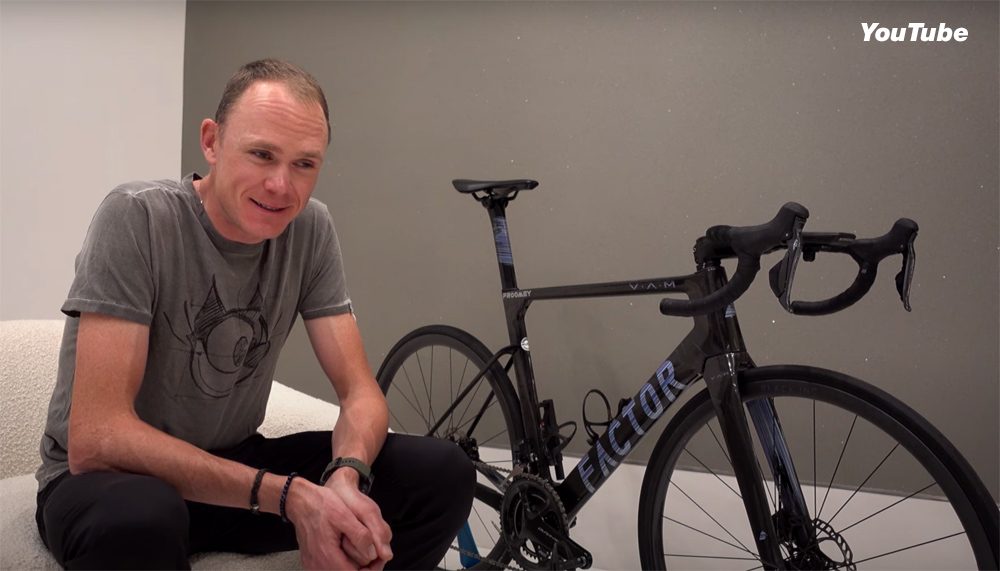 Chris Froome said what others think

But, the talking heads would say, there is that awesome stopping power and braking in the rain where instead of learning how to dry your rims with a bit of planning ahead, you buy a new bike with disc brakes and never worry about braking in the rain again. Awesome. That trumps the actual, real problems we didn’t have before but now have to deal with. And yet, the disc brakes are everywhere now. What happened? They started their life like any other new product on the market. People who liked them, bought bikes with disc brakes. Everyone else ignored the fad. It would have stayed that way if not for this caveat — you can’t buy just a pair of disc brakes and install them on your bike. If you want them, you need a new a bike. And who wants to sell more bikes? This is where the sponsorship angle came in. 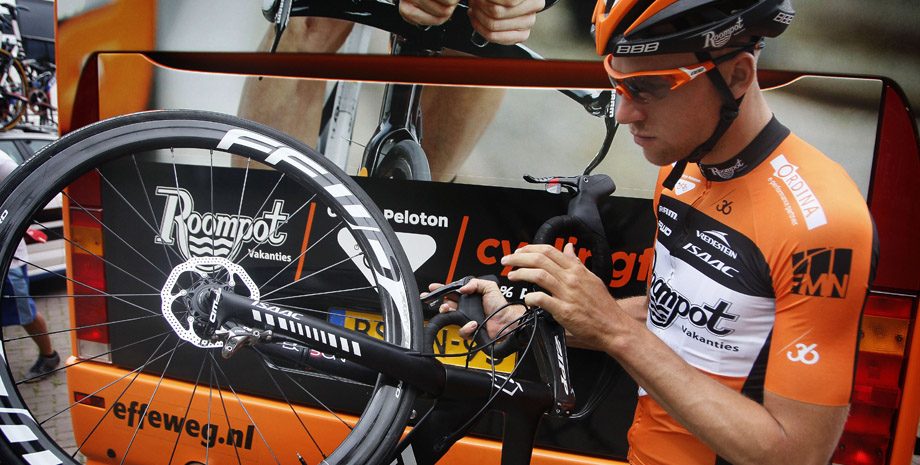 Make the pros use disc brakes, spin some marketing guff about stopping power and rain and boom, sell more bike. It started to work (ride what pros ride card always works) until the UCI stepped in and said — and this is just me imagining things — ‘pay up boys or we won’t allow these brakes in racing.’ This is just me imagining things — the boys paid. 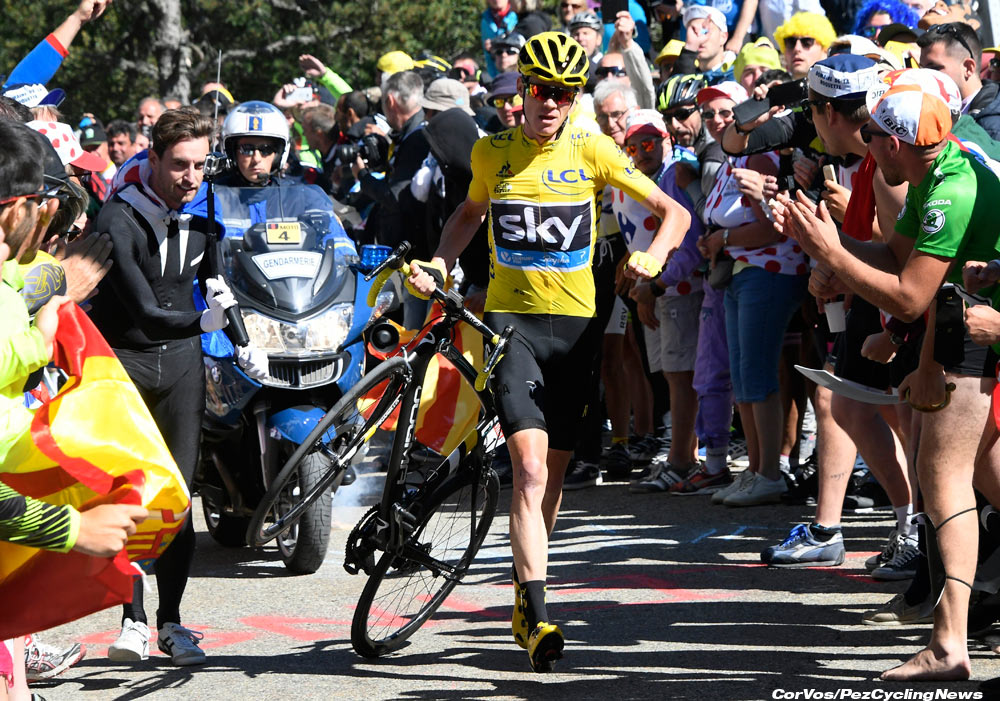 Disk brakes wouldn’t have helped on this occasion

At the 2019 Tour de France all but one or two teams paraded on bikes with disc brakes on the early stages. By the time they got to the mountains where you’d think you need disc brakes the most (per the BS spin), a lot of riders switched back to rim brake bikes. Did anybody notice it? I don’t know, but I did. My guess is, people who tell the talking heads what to say noticed this too because when the 2020 Tour arrived, everyone read the memo and played accordingly. No more options, disc brakes it is. 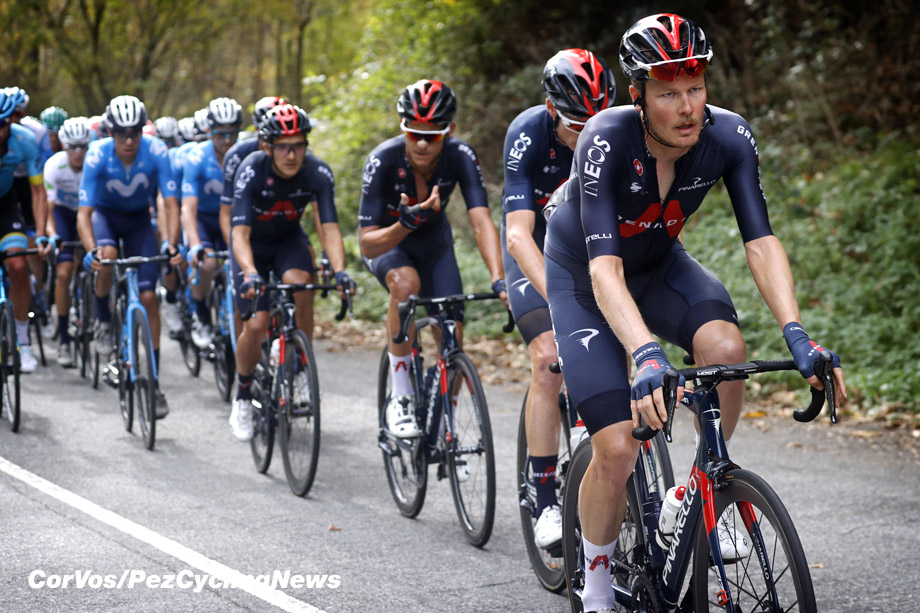 No disks for INEOS

Except for the INEOS Grenadiers team who a) could afford to decide what equipment suits them best and, b) practice marginal gains approach more than other teams. And so it went — a solution to a non-existent problem fuelled by the need to ramp up corporate profits. It’s the same principle, minus the profit, the UCI used just days ago to stamp out some aero positions riders use in races. Instead of solving real problems that cause crashes (just yesterday, a spectator took out Matteo Jorgensen at the Tour de La Provence in the last 100 meters of the race), they go around dishing out solutions no one asked for. If you’re not on disc brakes already, Chris says, “it’s only a matter of time until you’re made obsolete in a way and forced onto them.” It’s right there in the open how things are done these days — force onto them. I think I have seen this movie before and I know how it ends. 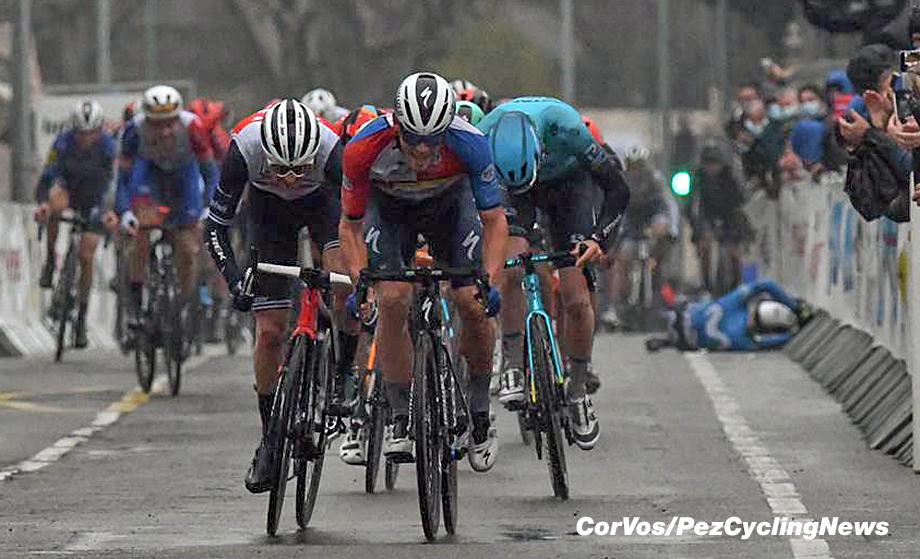 Maybe the UCI should think of Matteo Jorgensen first?

# And if you want to hear more from this prophet from beyond the Urals, check out the ‘Russian Crank at: www.nikolai.com.au. #

Spread the love TOOLBOX:  As the summertime rolls in many cyclists are dropping strength training to get more time in ...

Spread the love Dutch World Domination: Last Sunday there were four cyclocross rainbow jerseys on offer in Oostende and Holland ...

Spread the love We recently wrote about Giro D’Italia and the fact that this event threatens to cast a shadow ...